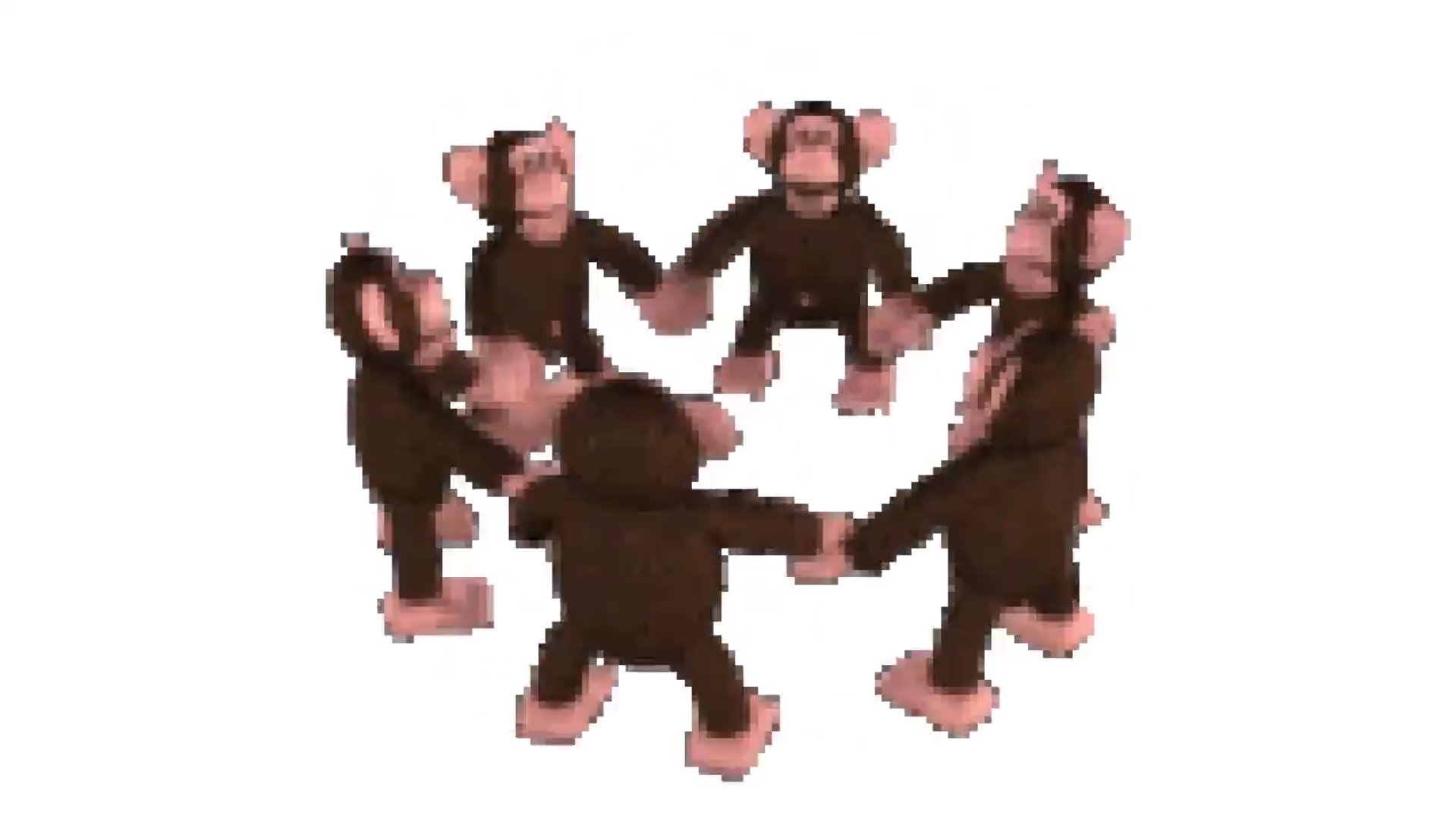 So… the President of the United States told you to be concerned about monkeypox. But not as concerned as for the Wuhan Cough. But still quite concerned.

While the Wuhan Virus was in some ways a bit different (though not really too different from the other respiratory pathogens we humans encountered in the recent past), the monkeypox is known for over 60 years. And, in fact, the corporate media has been stirring panic over it multiple times over the last 20 years or so.

But before we get to history, please take a quick look at the little document below:

So, the reason both the President of the USA and the skeptic/alternative media are talking about this is because someone’s been nasty in public with the monkeypox yet again (yes, this also happened in the past too). And it’s not just any random somebody – but exactly the Wuhan Virology Institute, you know, kinda sort of the source of the Wuhan Flu which is still being used by various countries (including and especially the People’s Republic of China) to suppress civil liberties.

However, unlike the Wuhan Coronavirus, the monkeypox has decades of literature behind it and also multiple attempts by media or governments (assuming the two entities are separate) to turning it into a panic.

Or the monkeypox panic of 1997? https://reliefweb.int/report/democratic-republic-congo/monkeypox-changes-its-pattern-human-infection

How about the monkeypox from 2018? https://www.scmp.com/news/world/europe/article/2163854/rare-monkeypox-virus-sickens-two-britain-after-they-separately

Or the panic from 2010? https://www.scientificamerican.com/article/pox-swap-30-years-after-small-pox-monkey-pox-on-the-rise/

Friendly reminder that monkeypox has been around for exactly 65 years already.

In fact, every year there are quite a few cases of monkeypox outside of the endemic area of Africa
Here’s a story from 2019 with a similar outbreak like the one in 2022: https://www.channelnewsasia.com/singapore/faq-what-you-should-know-about-monkeypox-877391

Here’s a 2017 story from WashPo on how monkeypox has been studied:
https://www.washingtonpost.com/news/to-your-health/wp/2017/11/14/how-we-got-the-story-about-monkeypox/ [tl;dr: places in the middle of fucking nowhere, accessible only by UN boats and where electricity doesn’t exist.]

2010 story from National Geographic about the connection between ending the smallpox vaccination programme and monkeypox: https://www.nationalgeographic.com/science/article/goodbye-smallpox-vaccination-hello-monkeypox

Nigeria has routine monkeypox outbreaks. There’s even Interim National Guidelines released once-a-decade on how to respond to outbreaks. Here’s the most recent one available [2017]: https://ncdc.gov.ng/themes/common/docs/protocols/50_1508912430.pdf

Occasionally the disease spills over in countries around Nigeria.
For instance in 2018, Liberia was hit quite harshly: http://outbreaknewstoday.com/monkeypox-confirmed-liberia-57035/

It will not be the first time humans are being stupid in public over monkeypox.
For instance in 2012 the CDC/US Feds quarantined a Delta flight over fears of monkeypox.

It was… bed bugs.

Here’s a 2010 story about monkeypox in Zaire/DR Congo and why the disease didn’t just die off as the eXpErTs had expected:

Just yesterday, in Romania, a doctor that has been making waves over his “warnings” of monkeypox allegedly found at his hospital… had to be taken to the loony bin after he beat up a patient and two nurses, and then tried to drive a garbage truck. You see… viral panics attract the looniest members of society.

Well, similar things happened in Britain in 2018. Most of the tabloid press and other media took it upon themselves to warn the public about the looming danger(s) of the monkeypox. Rumours of “hundreds” of “cases” spread like wildfire (and, just like with Covid or with monkeypox today, no clear definition of what a “case” means was offered). In reality, there had been exactly… two cases. Both discussed at length in this paper: https://www.eurosurveillance.org/content/10.2807/1560-7917.ES.2018.23.38.1800509 (please notice the quality and the precision of clinical data – the opposite of what was and still is the case with Covid19)

Soon after, the British press mostly deleted their panicard BS. In 2019, here’s how the issue was being framed: https://news.sky.com/story/rare-case-of-monkeypox-diagnosed-in-england-11877851

Here’s a 2016 story of the very serious monkeypox outbreak in DR Congo:

BS stories about monkeypox aren’t a new phenomenon at all. Nor an exclusive purview of the West.

Here’s the health minister in Malaysia in 2019, exasperated by the media’s exaggerations of the monkeypox (which at the time hadn’t even been detected in his country):

The United States suffered through an outbreak of monkeypox 19 years ago, in the year 2003. Here’s how the CDC was describing the situation in the middle of the outbreak:

Here’s how the 2003 outbreak was described in a paper from 2006 (remember that any outbreak is better analyzed at its end, rather than in the middle of it – because cooler heads can prevail and emotion/panic doesn’t run as high):

In May and June 2003, public health officials identified an outbreak of human monkeypox in the United States. This was the first instance of human monkeypox virus (MPXV) infection detected outside its endemic range in Africa. As of July 30, 2003, a total of 72 human cases had been reported. Thirty-seven (51%) cases were eventually laboratory confirmed, and 35 met the case definition set by the Centers for Disease Control and Prevention (CDC). Among the 35 patients whose cases were laboratory confirmed before July 11, 2003, 32 (91%) tested positive for MPXV by PCR, culture, immunohistochemical testing, or electron microscopy of skin lesions; 2 tested positive by PCR and/or culture of an oropharyngeal or nasopharyngeal swab; and 1 tested positive by PCR and culture of a lymph node aspirate. To date, no new animal or human cases have been reported.

The outbreak was relatively large compared with most reported events in Africa, but clinical features were milder than typically seen there. No human deaths occurred, although 2 children required intensive care. One patient received a corneal transplant due to chronic ocular infection.

Please notice that PCR tests were a thing then too. Though, unlike 2020/21/22, they weren’t used randomly on the general population – which allowed for a much more precise use. And even so, the PCR test was still rather useless as a diagnostic tool. Back in those days, diseases were counted by clinical diagnosis. The good ol’ days…

Anyway, “your pets are a danger” is also not a new narrative.

Here’s a cached document by New York Health authorities from almost 20 years ago where the potential connections between pets and monkeypox are laid out: http://webcache.googleusercontent.com/search?q=cache:zhaaRE7w7ZgJ:www.health.ny.gov/diseases/communicable/zoonoses/monkeypox/docs/petownerfacts.pdf+&cd=18&hl=ro&ct=clnk&gl=us

There was a time when the mainstream Left was equally skeptical of the public health establishment and Big Pharma as the Right.
Here’s an article about monkeypox in The Guardian from 2003: https://www.theguardian.com/science/2003/jun/12/thisweekssciencequestions -> Notice that the possibility of it spreading wildly through humans is treated with a shrug, precisely because the disease itself is pretty mild (and infection-acquired immunity is lifelong and sterilizing, by the way).

Experiments on and with monkeypox in aerosolized form (in theory more transmissible – tho not necessarily in practice) aren’t new either.
Here’s a paper from 2001 discussing such an experiment: https://www.nature.com/articles/3780373

And, finally, here’s a review of both experimental and natural infections of animals with monkeypox from 1958 to 2012: https://www.ncbi.nlm.nih.gov/pmc/articles/PMC3635111/

So… does all of this mean that this time ’round there won’t be a general(ized) panic about the monkeypox even though it’s the third or fourth semi-serious transnational outbreak just this century? Unfortunately, the answer is no.

“People are not stupid, people are fucking stupid” – is a reality that the powers that be know all too well. Additionally, unlike 2001, 2003, 2010 and 2019, people are significantly stupider today. Or, at the very least, the stupidity of the general public is far more evident today than it was at the turn of the century. With this fact in mind, do expect authorities in at least some countries to be supremely stupid in public.

Remember that in 2009, a few countries did go into lockdown over a very mild flu. And highly advanced countries at some point in time were very proud of spreading DDT everywhere in order to fight child paralysis. In fact, they were proud of it:

The point that I’m making is that the ability and willingness of the Trust the Science™ crowd to endorse policies that amount to being supremely stupid in public is not a new phenomenon. It did not start with Covid19 and there is no reason for it not to be manifested during this outbreak of monkeypox.

The purpose of this article is to equip you with the knowledge that this movie has been seen before. Monkeypox experiments (including dubious lab experiments), media panic over it, dubious policies meant to “protect” but in fact did only harm, dubious NPIs being deployed, very fake news spreading like wildfire… all of those happened multiple times just in the last 20 years. And the world didn’t end under a pile of monkeypox rashes. It won’t this time either.

Also, it is true that the smallpox vaccine protects (because, unlike the myocarditis-inducing experimental gene therapy clotshots of 2020, it actually is a vaccine). It is also true that infection-acquired immunity is lifelong and sterilizing.

Also, while it makes for good memes, monkeypox is not like HIV (Gay-related immune deficiency – GRID) in the sense that it’s not an STD per se. It’s still funny though to watch/read concocted double speak like “individuals who self-identify as gay or bi-sexual as well as other communities of men who have sex with other men” – because, you see, “homosexuals” is just not hip enough anymore.

That’s it for now. Don’t panic. Grab popcorn. And enjoy the shitshow. 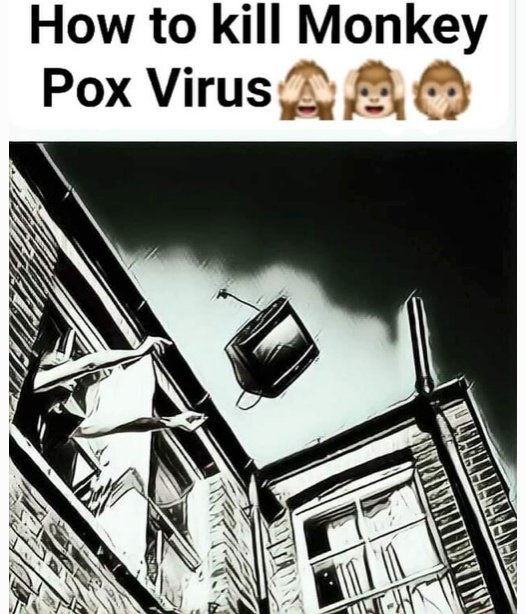