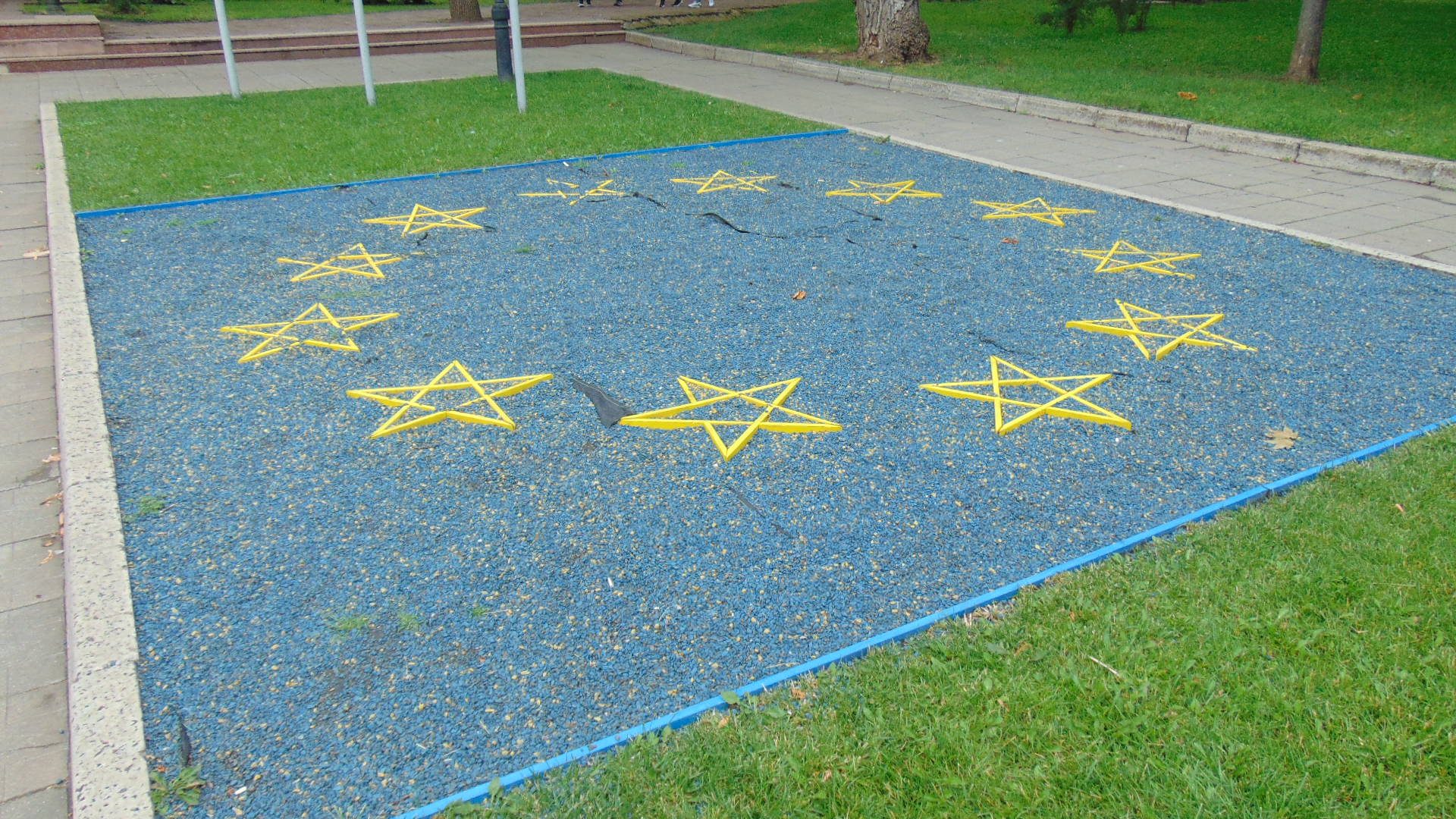 Uploading videos in real time is less of a challenge in Moldova than in other places (e.g. Georgia, Ukraine or Zimbabwe). The internet speeds are quite decent (superiour to Germany, for sure).

However, Google decided to be stupid in public and made logging in de facto impossible. So… Bitchute exclusive will it be until I get back to the home base. Also, editing takes time which I’d rather spend walking, filming, interviewing and driving around the 2000+ km roadtrip inside Moldova. But writing some thoughts very late in the night is more doable.

So with that out of the way, here’s what’s been going on.

First of all, those of the opinion that the European Union is Satanic might have a point. I’m only half joking. Of course, Satan probably doesn’t exist and the EU bureaucrats are a bunch of loons. However, the EU flag in the Ștefan cel Mare și Sfînt Park in downtown Chișinău is created, roughly speaking, using 12 renditions of the Sigil of Baphomet. And since Moldova is a mini-EU, err… you get the point. Tho we’d argue that Moldova is more like a mini-layout (minimachetuță) of the EU. But that’s a meme for another time.

Secondly, I learned that you still need a loicense to videotape in front of the Moldovan Parliament. I didn’t need one in Germany, Slovenia, “illiberal” Hungary, Ukraine (under state of war), Georgia, Armenia or even Zimbabwe. But Moldova… is different.

At least now I have the incentive to finish the montage and publish it before the election. And remember: the country is now ruled by a supposedly “liberal” administration that promotes transparency és szar.

The silver lining would be that at least no paperwork had to be done for this, the officers were civilized and one of them even sort-of apologized for the procedure even existing in the first place. Still… having your name broadcasted on an internal Telegram group of the Carabinieri was one of the weirdest encounters with law enforcement I’ve had in a decade.

Although Soviet-era displays are (finally) on their way out from the country, you can still spot them from time to time if you pay enough attention.

Now that in itself wouldn’t be such a terrible thing if it hadn’t been for the fact that in this very election one of the factions running hadn’t been the Communists (red star and hammer and sickle and the whole 9-yards) with good chances of winning.

If Moldovans had been spending at least half of the energy they spend on terrible politics by focusing on the downtrodden buildings in downtown Chișinău… that would be great. But then again, that would make the whole place a lot less fascinating so… there’s that.

On a more serious note, the place that keeps on giving leaders of this country, Fălești district, is underwhelming. This district is the hometown of the previous president, of the mayor of Bălți and runner in this election, of multiple ex-ministers and even more political operatives, shills, propagandists and apparatchiks.

Back in Romania, such places (which, for whatever reason, tend to give a disproportionate amount of national leaders or influential people) also benefit from some special attention. I don’t know whether it’s a good thing or not that this isn’t and hasn’t been happening in Moldova. Not my place to judge.

Perhaps I am wrong, but it stands to reason that things could improve if more attention were given by the city on code enforcement than on who is committing the unspeakable act of videotaping in front of the Parliament.

It is likely that I am wrong, though, because the economic situation of the country is worse than what the official numbers show. I haven’t seen so many central (read: downtown) commercial spaces for rent or outright for sale in Moldova since mid 2000s. The economic crisis is not an academic discussion in Moldova. It’s already here and it’s very rough.

If I were a betting man, I’d wager that none of them will be able. And things will go south even more. Because fixing the economics of this country is hard work. And ain’t no-one got time fo’ that. There’s bread and circus to be delivered.

This is Chișinău on July 2:

In any event – the show must go on. And it will. Even if on an emptier stomach.