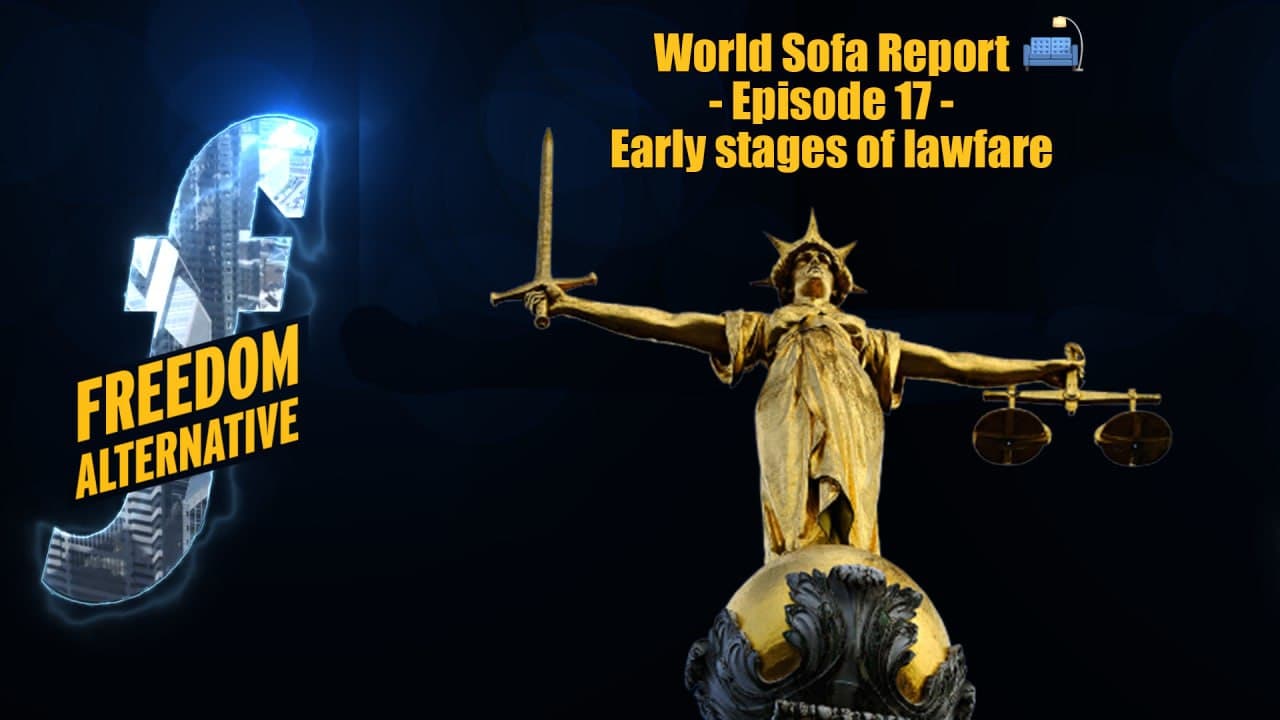 After months of procrastination and another few months of prepping, finally we can now say that such thing called non-Leftist lawfare finally exists. In its early stages, sure, but in a much better shape than just 12 months ago.

We start the show with a piece of news that connects the current US administration with a Romanian corruption scandal and the current head of European Public Prosecutor’s Office.

Then we delve into the positive effects of the Wuhan Flu – namely a booming job market for teenagers willing to work rather than sit in indoctrination camps and prisons (routinely referred in public wrongly as ”public schools”); an outright flattening of the public trust in the most corrupt bureaucrats in the world (routinely referred deceitfully as “experts”) and the coordinated efforts to intentionally destroy the political careers (via lawfare, protest, ballot box and beyond) of every single official who sang the tune of the ‘dEaDLy vIRuS’.

Meanwhile, Peru held yet another contested election in which both finalists are political outsiders and very polarized.

Speaking of polarization, Eric Zemmour (France’s Tucker Carlson as both his friends and his enemies routinely call him) has gathered so much influence that now serious questions are being asked on whether he will run for President. We’ll unpack that for you.

Meanwhile, the German tabloid BILD finally blows the whistle: 100% of the pandemic ‘measures’ that impacted children were not just immoral, illegal, useless and illiberal: but outright harmful in numerous ways to all children. There’s nothing the tabloid can do about it except for asking for forgiveness. Which is already a lot more than what dictator Merkel and the illiberal autocratic regime in Berlin has done so far. By the way, the regime in Berlin is busy arresting journalists. But please don’t notice that. You’re supposed to only pay attention to the bad dictatorship – not the ‘good’ one.

At the same time, Matteo Salvini is still working to create a bigger EU Parliament group to finally advance the interests of those not exactly fond of current Brussels – all while the Italian media is rife with CCP infiltration.

In the Middle East, everyone is focused on Israeli politics as the Netanyahu era appears to be drawing to an end. Yet, the more things change, the more they stay the same as the Netanyahu legacy will live on even if the fragile anti-Bibi coalition manages to get sworn into power.

A lot more interesting are the incremental changes happening in Saudi Arabia. In a move that seemed unimaginable 5 years ago, the Ministry for Islamic Affairs ordered mosques to turn down the volume so it won’t bother the sleep of children and non-Muslim residents. Remember, officially non-Muslims don’t exist in Saudi Arabia! The hosts’ Middle-Eastern experience comes in handy to put this apparently non-important piece of news into the wider context.

In Asia, all eyes will be on the showtrials against Aung San Suu Kyi which will be staged by the military regime later on this month. But perhaps more important is the topic of logistics. The disruption in the supply chains brought by the useless, illiberal, immoral and illegal measures justified by the Wuhan Cough has thrown the global shipment industry into probably the weirdest crisis in its history – a crisis which makes “stuff” more expensive for everyone and also slows down deliveries for most of the planet even if nobody has any pandemic restrictions anymore on commercial transport.

Also, the demographics of China is now so bad that the CCP openly acknowledges that manure may hit the ventilator much faster than previously thought. But how bad can it be? Well… the mathematics don’t look good, that’s for sure.

And, finally, Down Under there are increasing concerns about mice infestation. Imagine a billion mice in the city of Sydney or Canberra. Well… in a few weeks you won’t have to imagine. Because that’s what’s going to happen since the state governments have been busy wasting resources on sanitary fascism against its own people over a cough that killed fewer people in Australia than the ‘vaccine’ allegedly meant to prevent it.

These, and other topics (such as the notion of a global corporate tax or autonomous drones attacking soldiers on its own) are being discussed in a very dense World Sofa Report episode.

Black people in China ‘banned from McDonalds and evicted from their homes’ over coronavirus fears – https://www.independent.co.uk/news/world/asia/coronavirus-china-mcdonalds-black-people-home-evictions-a9465776.html

Australia Is Deadly Serious About Killing Millions of Cats – https://www.nytimes.com/2019/04/25/magazine/australia-cat-killing.html