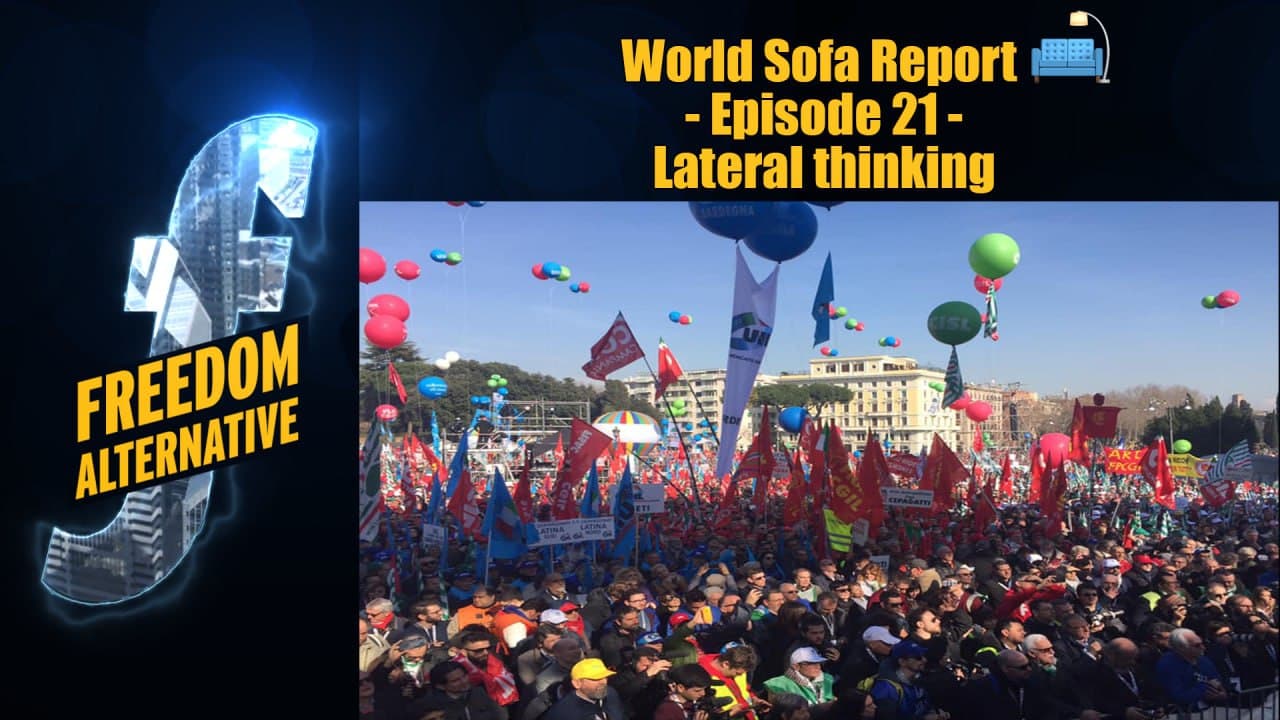 The Wuhan Flu has brought back a form of politicking not seen for decades – namely ad-hoc coalitions of groups usually opposed to each other. Well, not really the Wuhan Flu itself, but rather the governments’ absurd policies that were/are justified by the presence and/or spread of the Chinese Cough.

That’s how it’s possible to see unions supported by right wingers, or AntiFa groups joining legit fascist groups in direct-action type of activism as well as political cooperation simply unimaginable in November 2019. In Germany, this is called “Lateral thinking”. In Italy, those involved call it “Transversal politics”. Regardless of how you call it, it’s here and it is already producing effects in politics.

That’s how it was possible to see soccer moms joining rural rednecks in ousting Democrats in so many elections in the USA on November 3. Lateral thinking is also how it was possible for the Cough19 “vaccine” mandate to be suspended in Chicago. And later on nationwide after we taped this episode.

Lateral thinking by cooperation between classical liberals and hardline pro-life restrictionists may end up seeing Roe v. Wade overturned as well. The Senate Bill in Texas is written in a distinctly European style that wrong-foots most of the smartasses on the Left who were for too long accustomed to ruling via judicial activism.

Lateral thinking is also what brings disaffiliation of School Boards Associations from the National body. Of course, the Regime’s press suggests that anyone objecting is a far-Right medieval bigot but, in reality, homeschooling, unschooling and curricula reform are increasingly popular among previously disparate and opposed groups. A non-racist curricula benefits everyone. Homeschooling rights benefit both vegan hipsters and Evangelicals equally. Lateral thinking isn’t going away anytime soon on this topic.

Meanwhile, the muppets who fancy themselves as Western Leaders are busy promoting a new Iran nuclear deal. Yeah, that will work.

Facebook just uncovered a big troll farm run by the government of Nicaragua. It only took them 3 years. That’s almost as slow as the government investigating itself.

In Chile, voters are increasingly favoring a candidate who wants capitalism, border security, social conservatism and limited immigration. Now that’s enough to get labelled “far-right” these days. Especially since many lefties have started dreaming about destroying Chile again after the referendum that kickstarted a long process of constitutional reform was granted last year.

In France, the government is in outright war with American wokeism and, in a surprising populist outburst, the Macron administration is using the pre-existent anti-Americanism in the French society to paint far-Left ideas as enemies of the Republic. And the strategy may indeed work.

The European Union suspended funding for the WHO in the Democratic Republic of Congo after a sex scandal. In the segment dedicated to this piece of news we’ll go deeper into just how much is wrong with these international “missions” in Africa. Meanwhile, a bit up north, in Sudan, the army just staged a coup, interrupting Sudan’s transition to democracy.

Japan will press forward with military build up, China’s factory activity continues to shrink and economic friction between PRC and Australia will continue unabated, if we are to believe the Australian ambassador.

Meanwhile, at least 40% of New Zealand kids show signs of depression and other mental disorders as a result of the immoral and illiberal policies adopted by the Labor administration with the Wuhan Flu as an excuse. And the businesspeople of NZ aren’t optimistic about the economic future of the country.

These, and other news are to be discussed at length in the 21st episode of the World Sofa Report, taped just before we take off to Bulgaria for the election coverage.

Abortions Fell by Half in Month After New Texas Law – https://www.nytimes.com/interactive/2021/10/29/upshot/texas-abortion-data.html